The Duluth International Airport (DLH) is one of Minnesota’s 133 public-use airports. According to the 2019 Economic Impact Study conducted by MnDOT Aeronautics, DLH contributes $760.6 million in economic activity. This economic contribution would not be possible without a well-maintained and managed pavement system.

The Duluth Airport Authority (DAA), 148th Air National Guard, Federal Aviation Administration (FAA) and MnDOT Aeronautics all play a major part in maintaining DLH’s pavement. MnDOT Aeronautics performs Pavement Condition Inspections (PCI) and prepare an airport pavement management system (APMS) at each airport in Minnesota on a 3-year cycle. These studies help airports make informed decisions on how to best manage and maintain their pavement in a cost effective manner. The last inspection at DLH was in 2018 and the next inspection is expected to occur in 2021.

DLH has two runways that accommodate a range of sizes of aircraft to land and takeoff. Runway 9/27, the airport’s primary runway, is 10,591’ long and 150’ wide. Runway 9/27 has approximately the same amount of pavement as 12 miles of highway or — for a local perspective — 9 miles of Superior Street in downtown Duluth! Runway 3/21, the airport’s second runway, is 5,719’ long and 150’ wide.

Both runways are served by several taxiways, which allow aircraft to get to and from aircraft parking areas. The approximately 6.7 million square feet of airside pavement (pavement used by aircraft) is comparable to more than 75 miles of a typical city street. 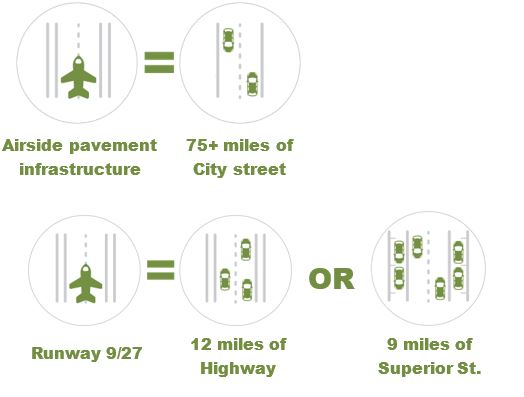 Similar to the roads you drive on, airfield pavement deteriorates and needs to be maintained. Airports are unique because aircraft travel at substantially faster speeds and can be substantially heavier than your car or semi-trucks, subjecting the pavement to a greater level of distress. Also unique to many airports is that the pavement condition is regulated by the FAA.

In addition to the Airport Authority’s required airfield and pavement inspections, the 148th Air National Guard also continually inspects airfield pavement to ensure safety of their F-16 fighter jet operations. There are higher standards for airfield pavement condition when compared to your typical street or highway. As pavement deteriorates it sometimes creates pebbles, rocks, and debris which, if ingested by an aircraft engine, can be a safety risk and can cause extensive aircraft damage that is very costly to repair and a dangerous situation for the pilot and passengers.

The Pavement Condition Index (PCI) from the 2018 MnDOT study shows the condition of the various pavement surfaces at DLH ranges from excellent to very poor. Determining a PCI value offers valuable information for planning reconstruction and maintenance projects, but does not provide a complete evaluation of the pavement structure. PCI only assesses the surface of the pavement. Pavement can be further evaluated by conducting geotechnical borings to understand the condition below the paved surface.

It is important to document the condition of the existing pavement, as well as the life cycle of typical airfield pavements and the associated costs of supporting that pavement as it ages. As part of the Vision 2040 Master Plan, pavement age and condition will be documented and used to identify maintenance priorities, development and redevelopment areas, as well as inform the Capital Improvement Plan (CIP).

As a pavement ages and progressively deteriorates, the cost of maintaining that pavement will increase. Figure 2 below shows how pavement deteriorates over time, gradually at the beginning, and then more rapidly at the end of the pavement’s useful life. As the pavement gets older and the conditions worsen, there are generally higher costs associated with maintaining and rehabilitating the pavement. As shown in Figure 2, it is more cost-effective to rehabilitate pavement in fair condition rather than waiting until the pavement condition worsens. This also extends the projected usable life of the pavement, maximizing the investment made with its original construction.

Rehabilitation measures can range from simple crack/joint sealing to actually removing, or milling, a portion of that pavement and repaving it with a new surface layer. The Vision 2040 Master Plan will identify appropriate maintenance or replacement activities and a timeframe for each pavement area to make the infrastructure last as long as possible to safely serve the users of DLH. 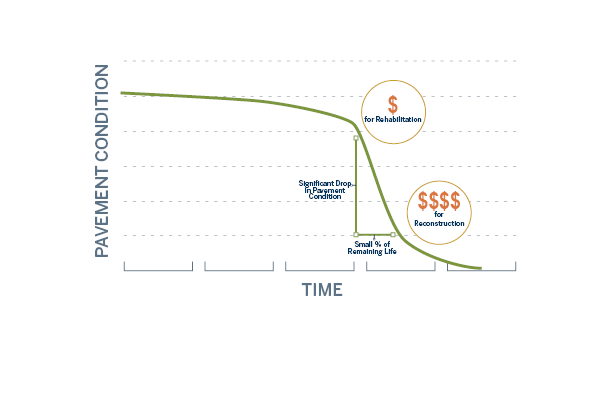 DAA May Board Meeting Notice